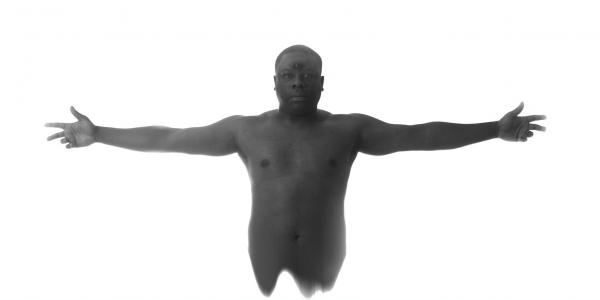 Afro-Surrealism: What Black Is and Can Be

By Lacy Murphy and Kevin McCoy
(all photos by Brea McAnally, all artwork by Damon Davis)

“[T]he tightrope of our hope.” These are the words that Afro-Caribbean writer and feminist activist Suzanne Césaire used to describe the surrealist movement in 1943 at the height of World War II. Often cited as one of the first afro-surrealists, Césaire believed that surrealism was a means of balancing two opposing views that had little room for compromise. The opposing views to which Césaire referred were white/black, European/African, and civilized/savage. For contemporary afro-surrealists, there is an additional opposition that the movement seeks to treat: the future-past – a point in time suspended precariously between what has been and what will be. According to D. Scot Miller, author of the manifesto for the contemporary afro-surrealist movement, the future-past is “RIGHT NOW.”

What does it mean to be living in America right now while black? It is a moment both informed by a troubled past and a precarious future. This sentiment rings especially true for St. Louis, a city facing twelve federal lawsuits following brutal mass arrests that took place during protests that erupted after the Stockley verdict was delivered in 2017. From “stop and frisk” policies to racially motivated 911 calls and other forms of racial profiling prevalent in society today, black Americans are continuously policed simply by race and appearance. This is why the mission of exposing the “right now” is crucial, according to Miller: “There is no need for tomorrow’s-tongue speculation about the future. Concentration camps, bombed-out cities, famines, and enforced sterilization have already happened. To the Afro-Surrealist, the Tasers are here. The Four Horsemen rode through too long ago to recall.”

But how can such a brutal past be ignored when it informs the present so much? The homogenization of black identity is a deeply rooted practice, stemming from Enlightenment era pseudoscience. By 1758, Swedish zoologist Carolus Linnaeus had taxonomized the homo sapien, placing Africans below all other races and classifying black identity as dull and listless. Such practices relegated black identity and culture to a codified world of stereotypes, and centuries of colonization, slavery, and human trafficking have further contributed to this history. Afro-surrealism, however, rejects these “existing roles of quiet servitude,” as Miller writes, and declares that “only through the mixing, melding, and cross-conversion of these supposed classifications can there be hope for liberation. Afro-Surrealism is intersexed, Afro-Asiatic, Afro-Cuban, mystic, silly, and profound.”

The radical plurality of afro-surrealism can be observed in St. Louis artist Damon Davis’s recent work for the exhibition Darker Gods in the Garden of Low Hanging Heavens.  In the final lines of the manifesto, Miller writes, “Afro-Surrealists create sensuous gods to hunt down beautiful collapsed icons.” The creation of new gods is central to Davis’s work. To reclaim black identity, the artist composes a parallel universe presided over by twelve black deities. He mixes new mythologies, fantasies, and histories to recast black identity, subverting past discourses through multiple modes of expression to communicate his radically new vision. “Work like this is absolutely about creating new narratives and origin stories,” Davis has explained. “Both to correct the purposeful lack of representation, but also to outright ignore the Western narrative and create new ones.” These new narratives expunge past dominant narratives about blackness and create an altogether new definition for what black is and can be.

Find more from Lacy Murphy at lacymurphy.com and Kevin McCoy at w-o-r-k-p-l-a-y.com.